Case Study: How We Write Story For Our Game Lake Ridden 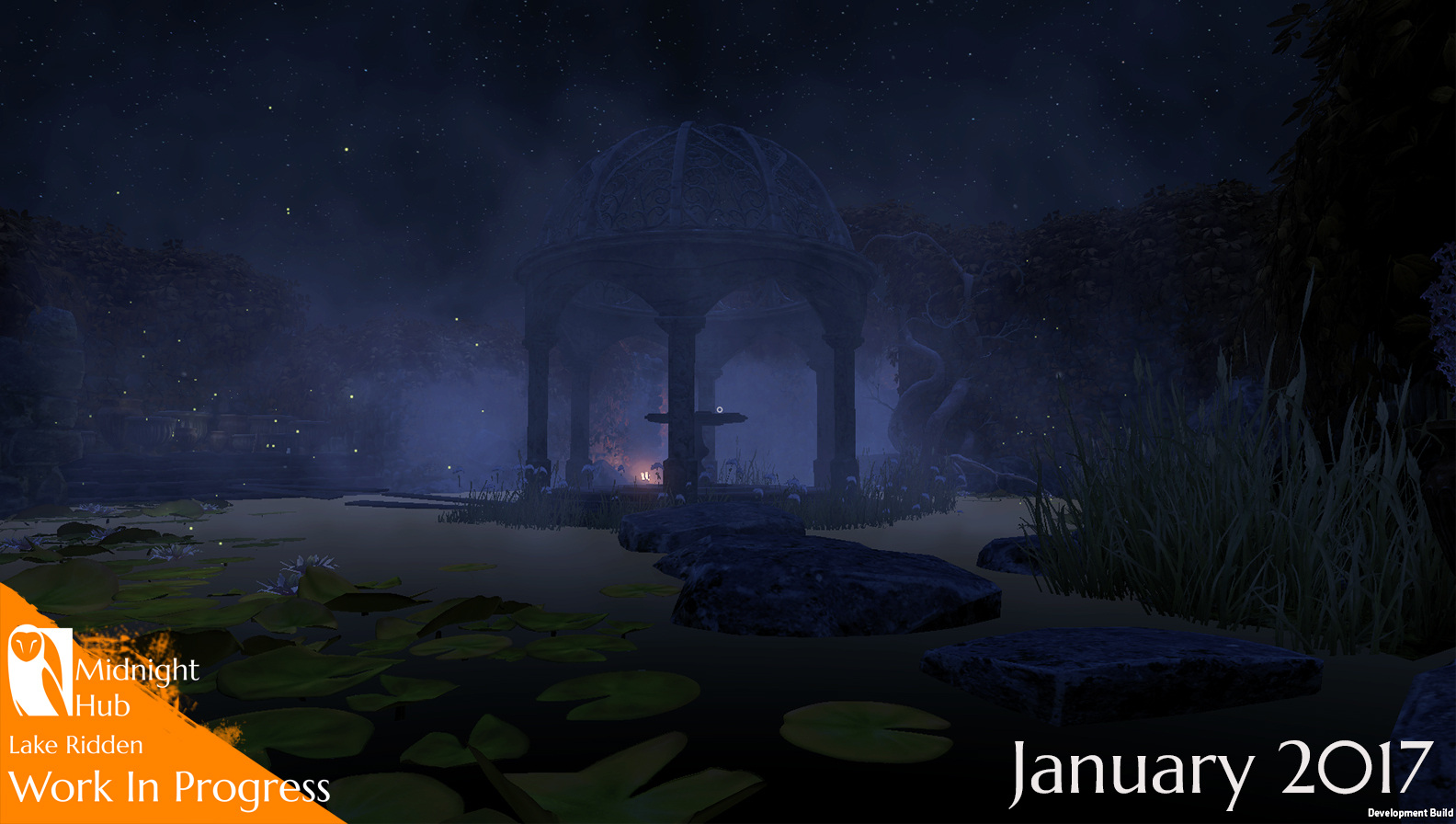 What’s up everybody? In this post we’ll talk about the basics on how we approached writing the story for our game Lake Ridden. As we talked about before on this blog one of the goals with our studio is to create games that have a deep and meaningful story, that experiment with storytelling in different ways and that have interesting, complex characters.

With Lake Ridden we aim to craft a compelling world for you to explore,  and make a lasting impact with the story. We’re aiming for a release this autumn, so things are still very much work in progress, but we’re getting there. We’ll never spoil the story for you guys, rather we’ll talk about the craft of story writing, how we have gone about making the story for the game. Remember that what works for us might not work for everybody, but hopefully this post will help you approach writing story for your own game! Some studios make the game and then patch the story on top of the game. This usually leads to a lot of frustration for the story writers. We wanted to integrate story as a native and important part of the game from the very first game idea! I’m writing this together with our in-house awesome game designers and story writers: Malin and Johan : ) Treat this post as a case study and one additional reference point among others!

1. The Outline
A year ago we started with the very outline for the game. What will the game be about and what is the main gameplay? Lake Ridden is about Marie, a young teenager who goes hiking in the woods with her little sister and her friends during the weekend. Her sister goes missing in the woods and while searching for her Marie enters a very dangerous place. To get back alive she needs to save her sister and unravel the disturbing history of the nearby town.

If we look at the verbs for the game we want the player to be exploring, walking, hiding, picking locks, collecting items, managing her resources etc. It’s a mystery-horror game, played trough the eyes of Marie. In this first stage we focused on the very core of the game. What should the player feel when playing Lake Ridden? What is the very experience of playing our game? If you’re making an action game you most likely want the feeling to be a bit like an adrenaline rush. If you’re making a horror game you probably want the player to feel scared at times. Define your verbs, actions and what the very core experience of the game is. With Lake Ridden we truly want to make a game where the story told both inside the game and with the game makes a lasting impact on the player.

2. What Happens In The Game?
The next question our Story Team (aka Malin and Johan) sat down to answer was: what will actually happen in the game, to make players feel the way we want them to feel when playing? We divided the game into roughly eight different “chapters”. This makes it much easier to get a grasp on the different parts of the game. This is an approach you can use if you have a fairly linear game.

If you look at games on Steam they have different price points and take different amount of time to complete (duh!). It’s important to keep this in mind when designing your game and its story. You likely have a prince point in mind for your game when making it (if you don’t chances are you need to go back and re-work your budget NOW). For big, AAA-productions like The Division or Battlefield  it’s usually around 60$/copy, for small indie games it can be as low as just a two-three dollars. Games that have inspired us, like The Vanishing of Ethan Carter, Among the Sleep and Gone Home are priced around 15$-20$ and usually take somewhere from three to six hours to finish. We’ll be aiming for 3-5 hours of gameplay with Lake Ridden, which together with our production value and team size puts us in the 15-20$ bracket.

So why am I talking about price points when this post is about writing story? Because you have to be aware of the expectations people already have on the marketplace where you’re going to sell your game! It’s a very, very bad idea to make a game last two hours and charge 60$ for it for example. Knowing the length of games similar to Lake Ridden that’s already out on the market gave us a very good indication on what length we should aim for. When we had a grasp on the average playtime for our game (three-five hours) it helped us tremendously with producing the content to make it hit that ~three hour mark for the average player. Think about when you go watch a movie; different kinds of movies usually have different average run times. The audience is used to and expect a movie to be a certain length, the same goes with games, but here you also have a bigger variety in pricing compared to the movies.

3. White Box The Game
Knowing the approximate length of Lake Ridden gave us a very nice starting point when making the contents for the game. As I’ve written about before we white boxed the game using extremely simple white boxes and items, just to test the pacing (how fast/slow the player progresses trough the game) and some basic puzzles. This helped us test things like how fast the player should walk, how long should the paths in the game be, how big the house should be etc.

Taking the game out of our heads and on to a screen really shows you which of your ideas that work and which are just crap. We’re strong believers in the almighty iterative development process, so we’re still going over the game, white boxing out concepts, replacing them with more final versions of dialogue and items as I’m writing this. This something we’ll continue to do until the after the summer, up until the final quality assurance phase of the game when we smash out the very last bugs and test the game on a lot of different hardware (the polish phase before the release). When writing story for a game it’s important to distinguish between what we call “Inner” and “Outer” story ark. These two serve different purposes when telling the story and fleshing out the characters in the game.

4. Inner Story Ark
When we knew what we wanted Lake Ridden to be about, the rough length of the game, the price point, the basic gameplay and had some white boxing in place it was time for the fun part; to dig deep into our characters twisted minds! In this phase the Story Team started to flesh out the different characters. Who are they, what do they want, what do they like, how to they talk etc. One way of doing this is to start with one particular character you find really interesting and make the (imaginary) players like him/her too. This does not necessarily mean you need to make the character likable, there are plenty of interesting villains in stories (just think of Breaking Bad or Dexter).

Some writers base their characters on persons they have met in real life, some do not. Some writers make long lists of facts about their characters, others don’t. We created “rules” for our characters to help us out. A “rule” can be: “Marie never talks about people in third person” or “Sofia uses a lot of humor in her dialogue“. These rules help you keep a character consistent and can give you help regarding what to write. At this point we also started to work on the spoken and written dialogue in the game.

Our mega talented voice actress Malin Håkansson is the voice of Marie. Working closely with her and our composer Patrik we managed to find a voice that sounds like Marie (one voice actor can often present many different voices!). Håkansson acted out a lot of the dialogue written by Malin and Johan, and there was this nice loop when Håkansson’s performance inspires the Story Team to write the character and the written character inspired the voice actress! Sometimes pieces of dialogue that sounded really good in written format came out weird when read out loud, and sometimes Håkansson improvised on the character, adding bits and pieces that became part of Marie. Remember that when you work with making a game one of the fastest, most budget-friendly content you can produce are voice lines. Changing voice lines take considerably less effort than redoing a 3D model and can really change to feel of your game in an instant. Use this to your advantage!

5. Outer Story Ark
The Outer Story Ark complements and surrounds the Inner Story Ark. This ark is all about the bigger picture of the story. This is the lore-heavy part. It provides a solid background to the world you present to the player. If you have some kind of technology or magic in your game world – now’s the time to explain how it works! And let’s face it: not all players are going to care about this stuff. Not everyone that plays your story-heavy game will be interested (or perhaps discover) most of this ark. To offer our players a sense of control we have been careful not to force too much story and lore on to the average player. This ark is for those who really want to dive into side-characters, the background of events, hidden letters, extra journals and more. We try our best to keep the average player in mind. It needs be very possible to have a great experience playing Lake Ridden without needing to find every little hidden note in the game. But for those who want to it’s possible to follow the rabbit hole deep down into the universe we’re currently writing for you.

There are many ways to write for a game. It’s important to find a way that works for you. At Midnight Hub the Story Team consists of Johan and Malin. To have other people that will bounce ideas with you can help a lot!

A final closing word on writing story for video games, there are many different ways to do it. If you have any nice resources please link them in the comments! We have tried our best to get feedback on our writing from other game writers, and being two in the Story Team really helps. Sometimes you will get stuck, and being able to bounce ideas of each other is really awesome! Deep down in our hearts we truly believe stories to be very important, and we’re working very hard to make Lake Ridden reflect that fact.

There is so much to tell you about how we work with story writing and world-building and hope this basic introduction is something you enjoyed! If you want more posts about the craft of making games, filled with tips and case studies, make sure to check out our other posts on game development:

Other than this Johan was interviewed this week, on Game Dev Unchained. Click here to listen to the podcast!

Subscribe to the Midnight Hub Newsletter, follow on Facebook or talk us on Twitter where we post new screenshots and behind the scenes stuff! We’re heading to GDC in two months to show an alpha demo of Lake Ridden, drop an email to press@midnighthub.com if you want to meet up try the demo : )

This site uses Akismet to reduce spam. Learn how your comment data is processed.