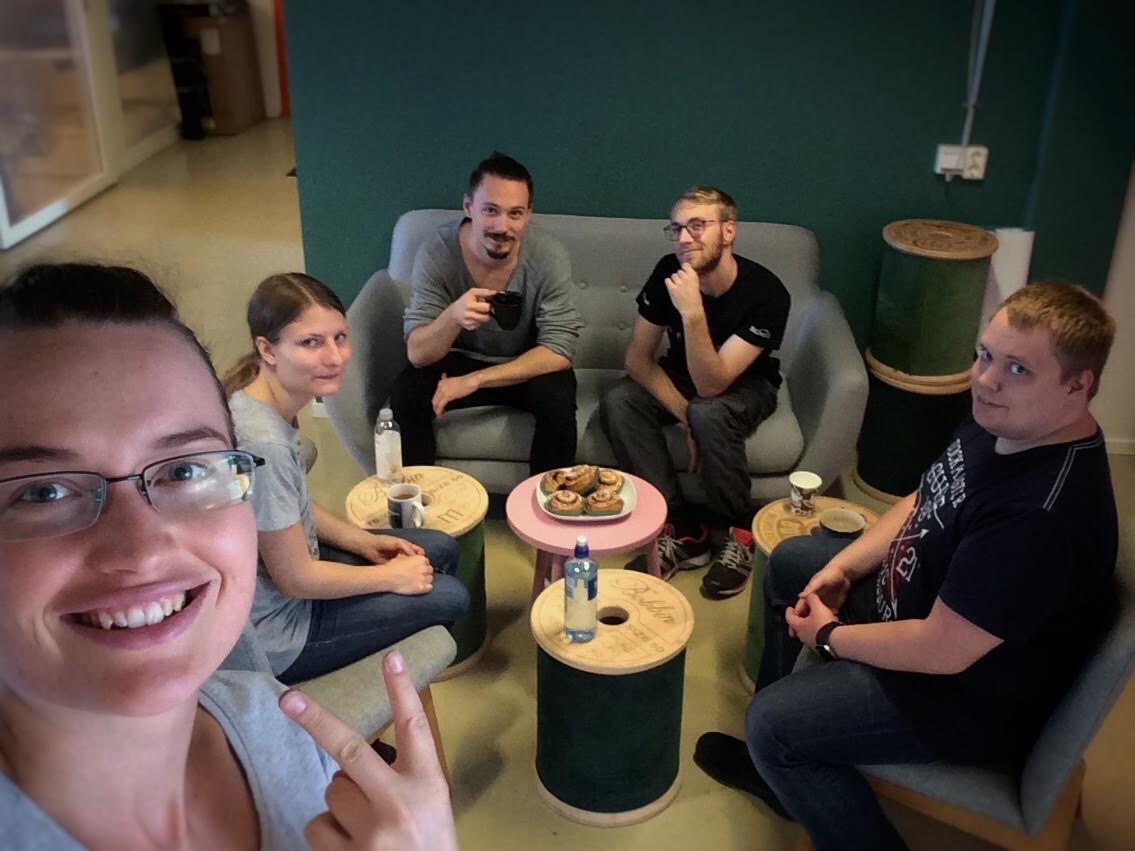 Lets kick this of with some great news! Midnight Hub has been granted support by Almi, an organisation owned by the Swedish state! We’re super excited to have Almi backing us on Lake Ridden. Not only does this increase the production value, but it’s also a great confidence boost for us that external partners take a chance on the team and Lake Ridden! As you can tell we celebrated with cinnamon buns!

Speaking of the team, it’s time to introduce Anton; our latest addition to Midnight Hub! Anton is an awesome artist with a focus on illustration, 3D, animation and environment design. Anton and Erik are already working closely together on all things artsy in Lake Ridden, throwing ideas and feedback to each other. Anton and his son goofing around!

– Anton, who are you?
– That’s such a tricky question, haha! I guess I’m a very curious guy, someone who likes to analyze, pick things apart and understand how they work. I love how the games industry always changes, and you can never learn everything there is about making games! As a kid I played a lot of different games, but it was not until my dad bought me Red Alert that I developed this passion for games. Red Alert was the first game I got really, really into. Anton is a very skilled 2d and 3D artists that likes to sculpt all kinds of things, like this medieval sci-fi warrior for another project.

– How did you get into the games industry?
– When I was around 20 I had like no idea what I wanted to. One week I was dead set on becoming a cop, next week I wanted to join the army, and after that I was totally into working with my music. Then my son was born and I realized it was time to make up my mind. My sister was studying game development at the time, and since I’ve always enjoyed playing games and being creative I decide I wanted a career in games. Having fun at work is very important to me. Since you spend almost one third of your life working I needed to find something I would love to do. Of course making games is sometimes frustrating and tiresome, but at the end of the day I find it very fun and rewarding. I love doing this eight hours a day! When he’s not working on Lake Ridden, Anton likes to draw and paint awesome art at home.

– What are you doing on Lake Ridden at the moment?
– Right now I’m working with the lighting, with modelling 3D objects, placing them out in rooms and making the spaces tell their own story. The rooms and spaces of the game should not only be stunning but also interesting to investigate and spark the curiosity of the player.

– What do you hope to bring into the team and the game?
– I’m a bit of a perfectionist, hehe. I want to push every aspect of the game to be as good as it could possibly be. If there’s some small detail that would make the game 10% better you’ll be sure I’ll work on that detail! Our art director Eric made an owl to Anton to welcome him to the team! Say hello to the eagle-owl!

We’re very happy to have Anton on the team! If you want to get to know the whole team you can read more about them over here: Erik (our magical art director), Malin (cat-loving coder), Johan (code, story and writing wizard), Patrik (musical mastermind) and Sara (producer and studio manger).

Cheers,
Sara and The Team